From curiosity to career with Bryan Dunnewald

Bryan Dunnewald’s chance encounter with an organ paved the way for a varied and fulfilling musical path. 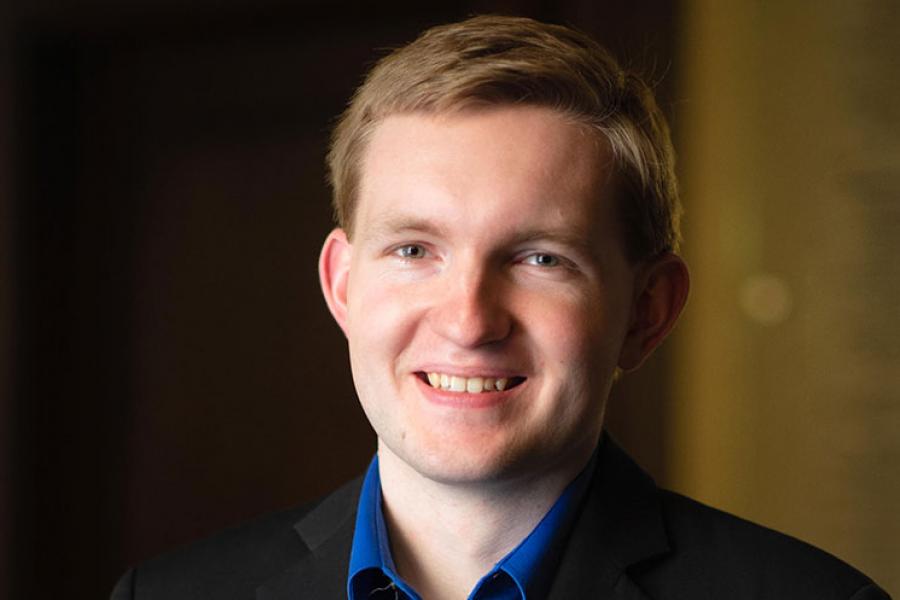 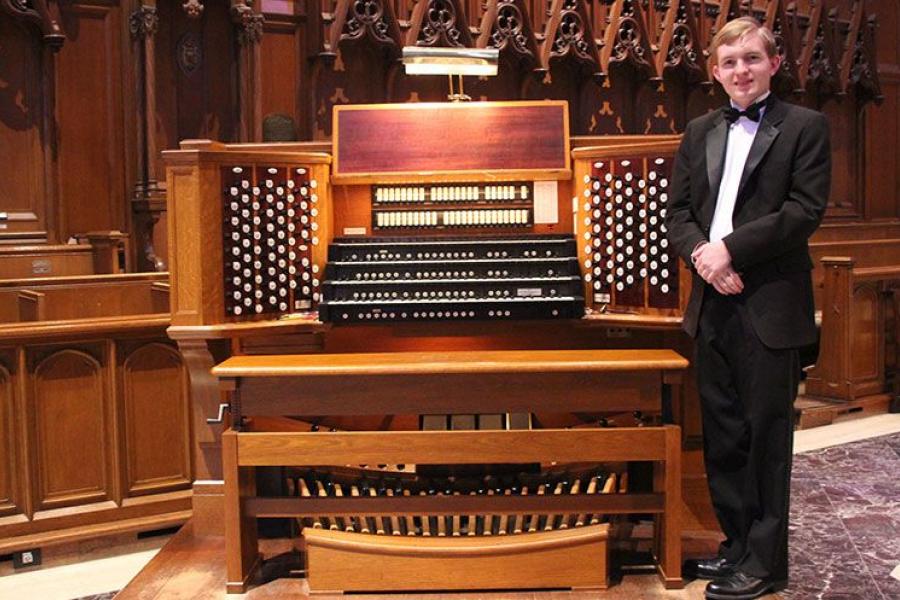 “I thought it looked so cool, with all the buttons and things,” he said, chuckling at the memory of his eight-year-old self.

Years later, Dunnewald is still fascinated with the organ: he currently serves as assistant organist and choirmaster at St. Mark’s Church in Philadelphia and has earned numerous performance accolades, including first prize at the 2013 Albert Schweitzer Organ Festival Competition.

The organ has also served as a key for Dunnewald, unlocking other musical opportunities and passions. He began composing while a student at Interlochen Arts Academy and developed an interest in orchestral conducting while pursuing his bachelor’s degree at the Curtis Institute of Music. Dunnewald recently completed his master’s degree in orchestral conducting at Mannes College of Music and studies under acclaimed conductor JoAnn Falletta as the Buffalo Philharmonic Orchestra’s Julius Rudel Conducting Fellow.

Dunnewald recently took a break from his busy schedule of performing, conducting, composing, and arranging to share his musical journey—a path that began at Interlochen Arts Camp.

How did you get started playing the organ?
I started on piano, like most organists do. When I was around 8 or 9, my piano teacher had a little electric organ in her solarium, and I used to play with it before my lessons. I thought it looked so cool, with all the buttons and things. I started asking her more about it. Then I sought it out. I went to my grandparent’s church, where I heard a pipe organ for the first time and really discovered its musical capabilities.

How did you find out about Interlochen?
My grandparents had a condo in Glen Arbor, and I had been going up there with them and my family every summer since I was born. Sometimes we would come down to Interlochen with them. Eventually, we came down for a concert and happened to meet Tom Bara. I talked to him about Camp, and decided to come the next summer.

You started out as a Camp student, then came to Academy. How did you decide that the Academy was the right place for you?
During my third summer at Camp, I realized that the work Tom and I were doing together was really good, and that he was having a really positive impact on my studies. I thought that if I kept on this track, I could do something great with the organ. I didn’t really know much else about the Academy; all I knew was that there was a great teacher and that the students were really good.

I called my parents about three weeks before school was supposed to start and said, ‘I’ve filled out an application. What do you think?’ My organ teacher from back home really helped convince my parents this would be the right next step for me. I’m very grateful for that; Interlochen was the most transformative experience I’ve had to date, and Tom is really the reason I am where I am professionally.

What are some things that you studied at Interlochen that helped prepare you for your current career?
One thing I did a lot of work on was dance accompanying, and that was huge. When you accompany dancers, you need to be aware of the form; the improvisation has to have constraints and has to make musical sense. Even though I don’t accompany dancers today, that experience really laid the foundation for my current work in composition and improvisation.

There were other things that got me out of my comfort zone. Most importantly, I became aware of orchestral music. Just being around orchestral musicians was critical. I still remember a lot of dinners where someone would say something like, “we were in rehearsal, and this was terrible.” Now, I know that those are things I shouldn’t do as a conductor.

I really believe that the investment in Interlochen yields a huge payoff. There is no other place like Interlochen. While I loved every other program I’ve attended, and they’ve been transformative experiences, there’s nothing else like Interlochen.

How did you get into conducting?
Ever since Interlochen, I have discovered how amazing orchestra music is. While I was at Curtis, I played with the orchestra as much as I could. I loved making music together.

I started secretly aspiring to be a conductor. Finally, I had to tell someone. I had a great teacher at Curtis, Jonathan Coopersmith. I asked him about getting into conducting, and he started giving me lessons. Everyone in the Curtis community was very generous; my colleagues were willing to give up their time for me to learn how to conduct. That’s the thing about conducting: You can’t do it without other people.

The organ, with some notable exceptions, is not usually an orchestral instrument. What sort of challenges (or benefits) does that present as you approach conducting an orchestra?
There are actually some benefits—both ones that I can see, and ones that other people have noticed. The number-one benefit of being an organist is that I am able to understand how multiple layers of music work together simultaneously. If you’re playing a single part, you have to be super observant to know what’s going on across the ensemble. But as an organist, I’m used to playing multiple parts of music at once and understand how a score is put together, what’s happening, and even how to transpose.

As for challenges, I sometimes wish I knew more about string technique or the instruments of the orchestra. On an existential level, I wish I knew what it’s like to play a single part, because I’ve always been able to see everything that’s happening in the music in front of me. When I see an individual part, it shows me how much I have to do to help the members of the orchestra understand what other players are doing and how they fit into the big picture.

The organ is very closely tied to religious tradition. As more and more churches switch to more contemporary ensembles, how do you help the organ remain relevant?
I think the best thing that organists or choir conductors can do is be open-minded and make music at a high level. I worked at Marble Collegiate Church with Ken Dake (IAC 71-78, IAA 77-79), and he absolutely embodies this. Marble has a brilliant choir, but they also incorporate contemporary praise music—all in one service. Ken will take what might seem to be an ill-fitting contemporary song and make it work for choir and organ.

I don’t think the boundaries between classical and contemporary music are quite as rigid as some people think they are. The ultimate goal of church music is to not let a moment pass without trying to make it as beautiful as possible. Everything has to be done well and with creativity.

Outside the church, I think concert organ repertoire has some potential. The organ is not well represented in classical music, which is why I get really excited about high-quality work for orchestra and organ. When we do get out of the church world, we have to play with the same kind of quality as any other soloist: our music has to be memorized, and we’ve got to play the hell out of it.

You’re a composer, conductor, choirmaster, and performer. How do you find balance?
So far, it hasn't been too much trouble. I like doing lots of different things, which is why high quality church music is a good place for me. Career wise, I want to keep playing and make sure I still conduct an orchestra.

I really like going forward in my career being open to different ways of putting things together instead of saying ‘I’m going to be an orchestra conductor.’ That’s not who I am—I would rather create an interesting career where I have a church as a home base and conduct an ensemble outside of it to fulfill that part of my musical life.