Ancient and avant-garde: The music of Garry Kvistad 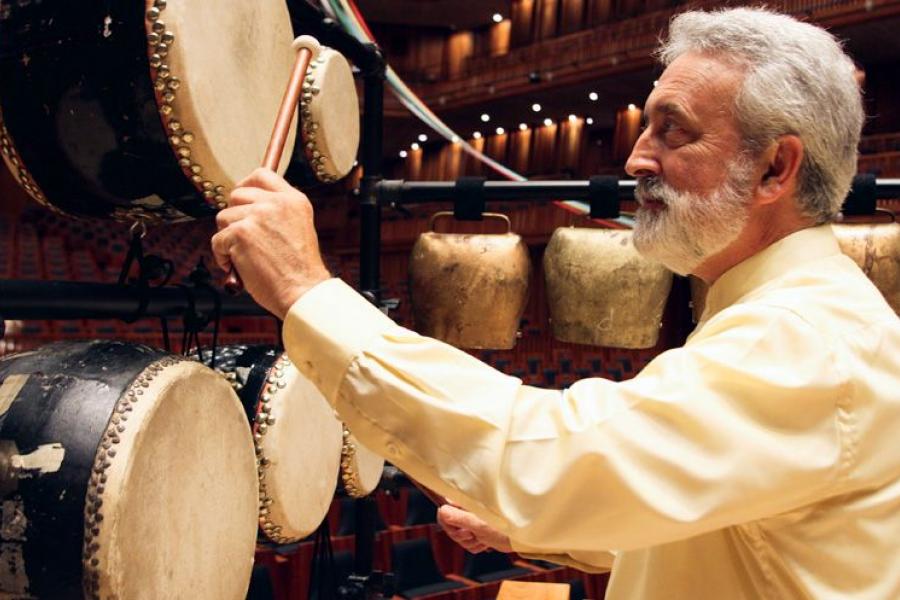 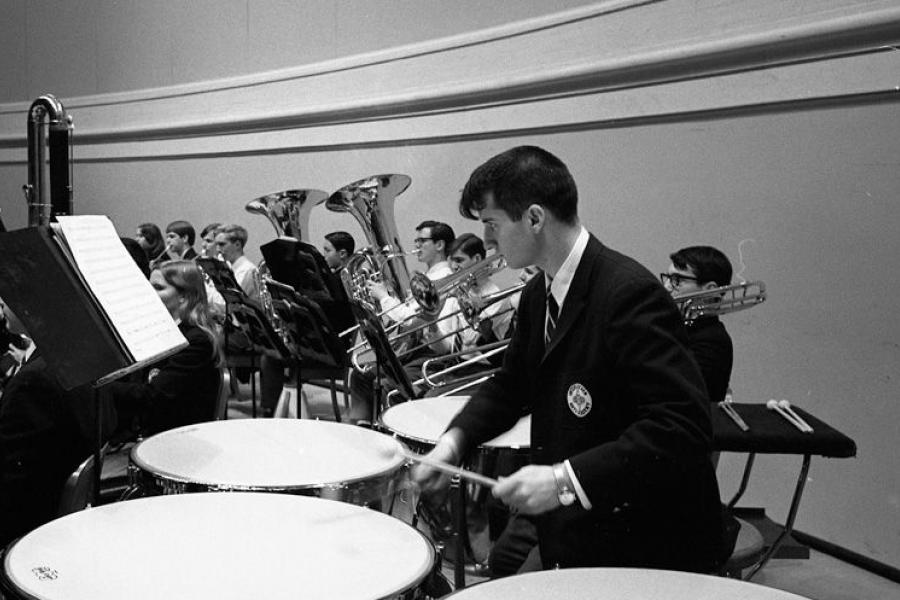 Kvistad performs with the Arts Academy Orchestra in Detroit's Orchestra Hall in 1967.

When Garry Kvistad (IAC/NMC 63-64, IAA 64-67) built the “adapted lawn chair” with spare parts from a junkyard, commercial success was the last thing on his mind.

Inspired by the work of Harry Partch, Kvistad made the salvaged metallophone to recreate the sounds of ancient musical scales. Kvistad was entranced by what he heard, and began looking for ways to share ancient music with others, regardless of their musical abilities.

In 1979, Kvistad created the Chimes of Olympus, a wind chime tuned to the ancient Greek Olympus scale, and founded Woodstock Chimes. Since then, Woodstock has developed dozens of unique chimes, sold thousands of units, and earned a reputation as one of the world’s finest manufacturers of wind chimes.

Kvistad started playing percussion in fourth grade, following in the footsteps of his older brother Rick (IAC/NMC 59-60). He also followed Rick to Interlochen Arts Camp, where he spent the summers of 1963 and 1964.

At Arts Academy, Kvistad quickly found himself exposed to new musical ideas. “Our orchestra conductor, Thor Johnson, programmed a lot of contemporary music in addition to the European masters,” Kvistad said. “Our percussion instructors, Jack McKinsey and his graduate assistant Michael Ranta, were really into avant-garde and improvisation. They had us playing music by John Cage and Lou Harrison.”

Kvistad’s interest in contemporary music continued after Interlochen, first as a student at Oberlin Conservatory of Music and then as a founder of BlackEarth Percussion. While touring with BlackEarth in Europe, Kvistad’s growing interest in building instruments was reaffirmed.

“There were a lot of interesting instruments in Europe at the time, such as the sound sculptures made by the Baschet brothers,” Kvistad said. “I’d also been reading about the ‘junk instruments’ that John Cage made—tin cans, sheet metal, those sorts of things. It was all exciting and fresh.”

Kvistad accepted a faculty position at Northern Illinois University, where he began taking classes in acoustics, woodworking, and metallurgy to support his dream of building instruments. Kvistad soon tired of academic life. He and his wife quit their jobs and headed east, eventually settling in Woodstock, New York.

It was there where Kvistad began making tuned wind chimes and founded Woodstock Chimes. He started selling his products at local craft fairs. In a moment of inspiration, Kvistad sent a chime to Susan Stamberg of NPR’s All Things Considered. The gift earned Kvistad a six-minute interview on the nationally syndicated program.

The big break came just a few months later when a savvy Woodstock employee noticed a recurring, familiar name among the orders: Gene Shalit, a film and literature critic for The Today Show. Kvistad reached out to Shalit, who invited Kvistad to appear on The Today Show. The five-minute interview resulted in the company’s first wholesale customers—including the Hallmark Company.

With Woodstock flourishing, Kvistad was free to return to performing. “In business, when you surround yourself with good, trustworthy people, your business can float on his own,” he said. “I still oversee the big picture and I’m always involved in product development and quality control, but I don’t deal with daily operations. As a result, I’m able to focus on building instruments and practicing.”

In 1980, Kvistad was invited to play with Steve Reich and Musicians. “Steve and I made a connection right away,” Kvistad said. “I’ve played with him ever since.”

Kvistad also connected with the other Steve Reich musicians, two of whom were founding members of NEXUS Percussion. When NEXUS member John Wyre retired, Kvistad was a natural replacement. He has played with the ensemble since 2002.

Kvistad’s instrument-building business gives him unique insights into his performance career. “Having a knowledge of the mechanics changes your approach to the instrument,” Kvistad said. “Because I understand how it works, I know the best place to hit it, which mallets to use, and which technique creates a particular tone or feeling.”

Kvistad had the opportunity to demonstrate that knowledge in June 2019, when he returned to Interlochen to teach at the Interlochen Percussion Institute. While on campus, Kvistad also celebrated the 40th anniversary of Woodstock Chimes.

“What I’m doing here at Interlochen is indicative of how I balance my career,” Kvistad said during his visit. “I’m teaching and playing concerts, but I’m also doing a meet-and-greet at the Scholarshop and meeting with a wholesale customer. Both my music and business are related in terms of music and sound.”

“In my life, I’ve found that you can have a wide range of interests if they relate and reinforce each other.”