Bensdorf talks about staying motivated during the pandemic, performing in President Biden’s inauguration, and a life-changing moment at Interlochen Arts Camp. 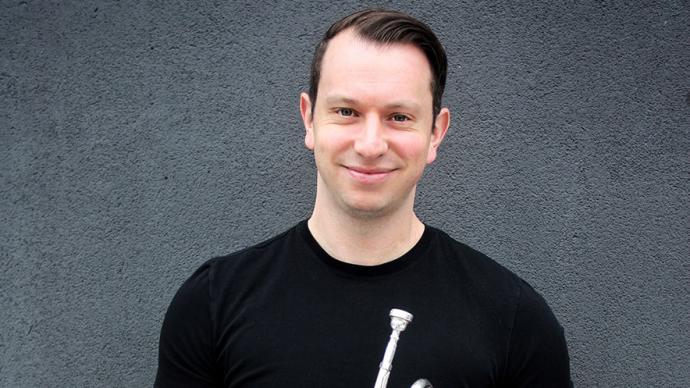 As a child, Ethan Bensdorf (IAC 95-00, 02) listened intently to his mother’s stories about Interlochen Arts Camp and visited his sister during her summers there. But he never imagined how profoundly Interlochen would change his life.

During his first summer at Camp, the ten-year-old Bensdorf enrolled in Instrument Exploration, a class designed to introduce younger students to a variety of band and orchestra instruments. “I remember having a ton of fun trying all the instruments,” Bensdorf said. “When I picked up the trumpet, I was able to make a pretty decent sound, and the instructor was really impressed.”

Bensdorf’s discovery of the trumpet during Instrument Exploration set him firmly on his path. Later, he went on to study the trumpet at Northwestern University and win accolades such as the 2006 Armando Ghitalla International Trumpet Classic Award and the Voisin Trumpet Award. In 2008, he joined the New York Philharmonic as a member of the ensemble’s trumpet section. He also teaches as a member of the trumpet faculty at Manhattan School of Music.

Here, Bensdorf talks about his journey to the New York Philharmonic, staying motivated during the pandemic, performing in President Biden’s inauguration, and staying connected to Interlochen. “Interlochen has given me so much,” he said. “I’m more than happy to give back.”

At what point did you realize that you were serious about playing the trumpet?
In high school, my two extracurricular activities were music and soccer. I was being pulled in two different directions, so I had to make a choice. I appreciated the talents and friendships that the music pathway offered, so I decided to devote more time and attention to music.

Another key factor was having access to the Chicago Symphony Orchestra on a semi-regular basis. Hearing the legendary Bud Herseth and having his sound in my head was pivotal. I had a lesson with him when I was 14. The only thing I remember is that I was starstruck and terrified. Hearing him up close was mind blowing.

You graduated from Northwestern University in 2007 and joined the New York Philharmonic almost exactly one year later. Tell us about that journey.
Two weeks before I graduated, I won a position with the Naples Philharmonic in Florida. It was the perfect job: my colleagues were supportive and the orchestra is incredible. It was a nice place to get a lot of repertoire under my belt, form relationships, and learn to be a professional.

Because I only had a one-year contract in Naples, I immediately started auditioning for other jobs. I actually made the preliminary recording for the New York Philharmonic audition before I even arrived in Florida. I heard back a couple of weeks later; they wanted to hear me in a live semi-final round. I went and played the audition and did a couple of trial weeks before I was officially offered the job.

I finished the season in Naples on June 8; my first rehearsal with the New York Philharmonic was on June 9. I didn’t mind the tight turn-around—it was nice to jump right in and not have time to freak out about it.

What does day-to-day life look like for you as a member of the Philharmonic, and how do you stay motivated during the pandemic without regular rehearsals and performances?
It depends on if it’s rehearsal day, a concert day, or a free day. If we have rehearsal, I warm up in my living room (which is a rare treat in New York City—I’m surprised I haven’t been evicted yet!). Then I get a coffee, sit on the subway, and prepare myself for the day. After rehearsal, I have lunch and do some teaching in the afternoon.

On concert days, I always take a nap. I think it’s important to relax and conserve energy for the concert that night. When concerts start to pile up, it gets exhausting quickly.

I also try to exercise just to stay healthy. When you’re physically healthy, it helps your mental health. Most of my practicing happens in the afternoon. I’m mostly a morning or afternoon practicer. I have some colleagues who love to practice late at night and will stay at the hall after concerts. I can’t do that.

Normally, my colleagues and audiences are huge sources of inspiration and motivation. Without regular performances during the pandemic, my students give me the drive to keep going. I’ve been very fortunate to be able to teach in person at Manhattan School of Music this year.

During President Biden’s inauguration, you were featured in a segment with a young trumpeter from Georgia. How did that come about?
During the lockdown in New York City, I was inspired to play on the roof of my building by a colleague who lives in Brazil. He posted a video of him playing on his balcony, and the sound really carried. I thought, “I should do something similar.” The New York Philharmonic posted a video of me playing John Lennon’s “Imagine” on their Facebook page.

One day, out of the blue, I got a message on Instagram from Jason, a 12-year-old trumpet player. He said, “There was a news feature on me in the Atlanta news, and you’re mentioned in it because your video inspired me to play outside of the hospital here.” It was incredible to see how music can connect and inspire people across state lines and country borders.

After that first message, we kept in touch. Jason’s a great kid, and he’s really improving on the trumpet. In preparation for the inauguration video, he decided the duet we would play. We did a Facetime rehearsal so I could hear what he had planned.

Why did you want to get involved with Interlochen Online’s Master Class Saturday Series?
Interlochen has always been an inspiration to me. As a student, the competitive energy there motivated me to get better. Every time I go back, I remember how that energy inspired me. Interlochen has given me so much. I’m more than happy to give back.

Right now, the arts are in a precarious position. The more exposure we can give to students, the better off our industry will be in the future.