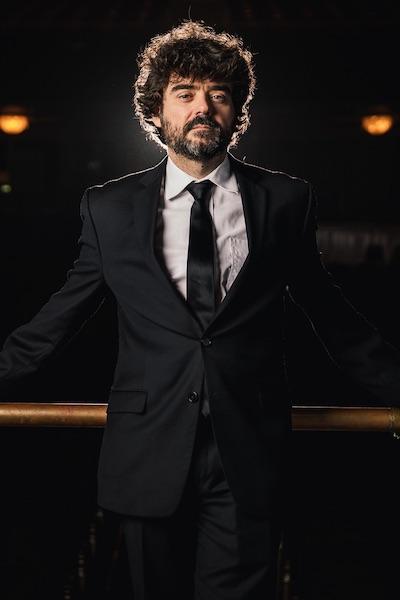 Octavio Más-Arocas is a versatile and dynamic conductor whose achievements demonstrate his talent and musicianship. Más-Arocas is the newly appointed Director of Orchestras and Professor of Orchestral Conducting at Michigan State University College of Music, and serves a Music Director and Conductor of the Mansfield Symphony Orchestra in Ohio, Music Director of the Marquette Symphony Orchestra in Michigan, and Conductor-in-Residence at the Cabrillo Festival of Contemporary Music in California.

An award-winner conductor, Mr. Más-Arocas won the Robert J. Harth Conducting Prize at the Aspen Music Festival, the Felix Mendelssohn-Bartholdy Award, given by Kurt Masur, is the recipient of the Thelma A. Robinson Award from the Conductors Guild, a Prize Winner of the Third European Conductors Competition, and a winner of the National Youth Orchestra of Spain Conductors Competition. Mr. Más-Arocas was selected by the League of American Orchestra to conduct the Fort Worth Symphony Orchestra in a showcase event during the League’s National Conference in Dallas.

Chosen by Kurt Masur, Mr. Más-Arocas was awarded the prestigious Felix Mendelssohn-Bartholdy Scholarship. Consequently, he worked as Maestro Masur’s assistant with the Leipzig Gewandhaus Orchestra and the Helsinki Radio Orchestra, and made his German conducting debut with the Leipziger Symphonieorchester. The offer came after Mr. Más-Arocas’ New York debut concert sharing the podium with Maestro Masur and the Manhattan School of Music Symphony.

In the last few years Mr. Más-Arocas has conducted orchestra across North and South America and Europe including the Filarmonica George Enescu in Romania, the Orquesta de Valencia and Granada City Orchestra in Spain, the Leipziger Symphonieorchester in Germany, the Orquestra Sinfônica da Unicamp in Brazil, the Green Bay, Traverse City, Bluewater, Catskill, Clinton, Fort Worth, Spokane, Toledo, Phoenix, Memphis, Kansas City, and San Antonio Symphonies, the National Repertory Orchestra, the Manhattan School of Music Symphony, the orchestras of Viana do Castelo and Artave in Portugal, the Interlochen Philharmonic, the Universidad Nacional Autonoma de Mexico Philharmonic, the Rosario Symphony in Argentina, Kharkov Symphony in Ukraine, the National Youth Orchestras of Portugal and Spain, the Pescara Symphony in Italy, the Amsterdam Brass in the Netherlands, and the Ciudad Alcala de Henares Symphony. In addition, Mr. Más-Arocas has served as assistant conductor at the Madrid Royal Opera House.

Mr. Más-Arocas was assistant conductor of the National Repertory Orchestra, which he conducted in subscription, family, and pops concerts. As the Resident Conductor at the Sewanee Summer Music Festival he conducted the Festival, Symphony, and Cumberland Orchestras. Other festival appearances include the Aspen Music Festival, the Cabrillo Festival of Contemporary Music, the Festival Internacional Carlos Gomes in Campinas, Brazil, the Interlochen Music Festival, the Bach Festival at Baldwin Wallace University, and the MidAmerican Center for Contemporary Music.

His ability to work, inspire, and transform young talents has led him to be a frequent guest conductor with prominent music education organizations and ensembles around the world. He has worked with the World Youth Symphony Orchestra, the national youth orchestras of Portugal and Spain, has conducted All-State Honor Orchestras, and has been in residence with university orchestras in Chicago, Cornell University, Portugal, and Brazil. Mr. Más-Arocas has lead tours with the National Youth Orchestra “Templarios” of Portugal, the Interlochen Symphony, the Baldwin Wallace Symphony, and toured Argentina with the Silleda Wind Symphony.

In demand as conducting teacher, Mr. Más-Arocas has taught workshops and masterclasses in the USA, Portugal, Brazil, and Spain and is currently on the faculty of two of the world most competitive conducting workshops, the Cabrillo Festival Conducting Workshop, which attracts the most talented conducting students from all around the world, and the Ithaca International Conducting Masterclass. He has taught at the Queens College Conducting Workshop in New York and leads the very selective graduate orchestral conducting program at Ithaca College.

Mr. Más-Arocas is an alumnus of the prestigious American Academy of Conducting at Aspen, where he studied with David Zinman. He completed doctoral studies and his main mentors include Kurt Masur, Harold Farberman, and Emily Freeman Brown.