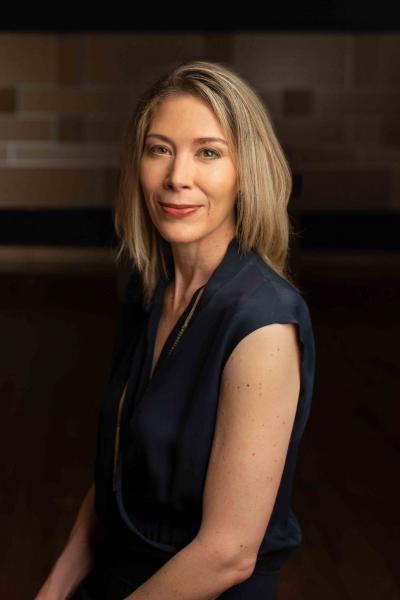 An Emmy-winning producer and brand strategist, Katharine Laidlaw joined Interlochen Center for the Arts in May 2018 to oversee marketing, branding, communications, public relations, digital media and content, as well as stakeholder engagement. Since beginning her role, she has led development of a new brand strategy, creative platform, and visual identity, and launched a digital advertising and nurture campaign that has generated triple digit inquiry increases for Interlochen Arts Camp and Arts Academy, with ten fold increases in applications. She also championed and led development of Interlochen’s new website, which premiered in spring 2021.

Prior to coming to Interlochen, Laidlaw served as the Chief Marketing Officer at the University of North Carolina School of the Arts (UNCSA), where she oversaw marketing, communications, public relations and brand management. As CMO, she was the driving force behind a comprehensive rebranding effort, including creative direction, visual identity, messaging, taglines, and strategy for institutional positioning, recruitment, and the successful "Powering Creativity" comprehensive campaign. She was responsible for UNCSA's multifaceted award-winning advertising, which garnered 18 awards from the Higher Education Marketing Report, three CASE Awards, and three awards from the Collegiate Advertising Awards. In Fall 2017, she launched a new recruitment campaign after which inquiries on the website doubled, applications increased +30%, and deposits increased +90% year over year. During her tenure, all five arts schools were consistently ranked in the "Top Ten" in industry-leading publications such as The Hollywood Reporter, The Wrap, and Backstage. She also led creative development for the editorial strategy and visual identity of a reimagined alumni magazine entitled “Scene.” Through her work on institutional positioning, she helped advance UNCSA’s reputation as a leading cultural institution in the South and a significant contributor to the state, national, and global creative economy.

Before her appointment as Chief Marketing Officer, Laidlaw served as UNCSA’s first Executive Producer, with production credits that include the university’s annual production of The Nutcracker, which doubled its gross revenue during her tenure. She also produced Spring Dance as part of UNC-Chapel Hill’s commemorative season “The Rite of Spring at 100,” which was filmed for UNC-TV. She received an Emmy Award for another PBS program, Much Ado About Nothing, which won Best Arts Program in the Midsouth Division in 2013.

Laidlaw started her career in commercial theatrical producing, first at Fox Theatricals in Chicago and later Waxman Williams Entertainment in New York. Her credits include eight Tony nominated productions, the Broadway premiere of a Pulitzer prize-winning play, in addition to several West End, Off-Broadway, regional productions, and developmental workshops. Laidlaw also has served as a panelist for the National Endowment for the Arts, a member of the Corporate Cabinet for the Forsyth County United Way Campaign, and as a marketing consultant and developer of corporate sponsorships for Broadway and Off-Broadway productions. Her brand marketing experience includes positions with The Coca-Cola Company and Hanesbrands, Inc.

Laidlaw graduated from The Lawrenceville School, received her B.A. (Honors) in English from Davidson College, and a M.B.A. with a concentration in marketing from UNC-Chapel Hill.

Extraordinary art holds enormous power: to move minds, broaden perspective, and transform lives. Teaching youth to expand and cultivate their creativity empowers them to harness one of their greatest strengths.