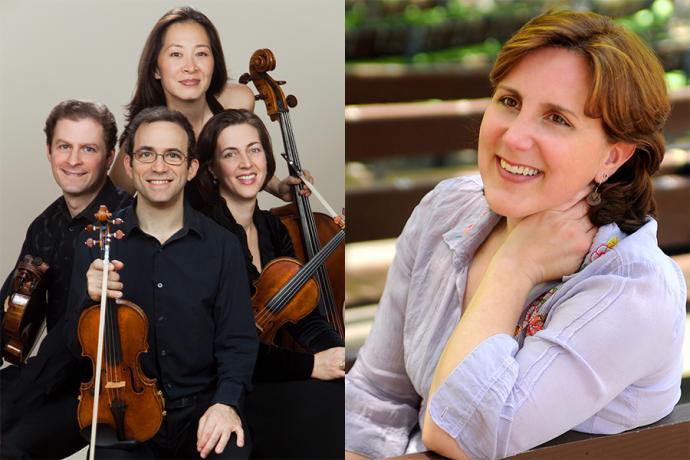 Soprano Dawn Upshaw and the Brentano String Quartet will bring their new monodrama “Dido Reimagined” to Interlochen Center for the Arts’s Dendrinos Chapel on Thursday, April 28 at 7:30 p.m. Tickets can be purchased at interlochen.org/tickets.

The concert will feature Renaissance, Baroque, and modern works for soprano and string quartet. The program begins with early English songs and consort music, including a performance of the famous “Dido’s Lament” from Henry Purcell’s 1689 opera Dido and Aeneas. Next the performers will bring to life a new monodrama that reimagines “Dido’s Lament” for the 21st century by Pulitzer Prize-winning composer Melinda Wagner and librettist Stephanie Fleischmann.

A five-time Grammy Award winner with more than 50 albums to her credit, soprano Dawn Upshaw has cemented her place as one of the world’s foremost interpreters of opera and concert repertoire. Upshaw made her debut with the Metropolitan Opera in 1984 and has since made hundreds of appearances with both the Met and other prestigious opera companies around the globe. An avid champion of new music, Upshaw has premiered numerous operas, song cycles, oratorios, and solo works, including The Great Gatsby by John Harbison; the Grawemeyer Award-winning opera, L’Amour de Loin by Kaija Saariaho; John Adams’s Nativity oratorio El Niño; and Osvaldo Golijov’s song cycle Ayre. Upshaw is currently head of the Vocal Arts program at Tanglewood Music Center and previously served as the founding artistic director of the Vocal Arts program at the Bard College Conservatory of Music.

Hailed by The New York Times for their “luxuriously warm sound [and] yearning lyricism,” the Brentano String Quartet has been captivating audiences since its inception in 1992. The ensemble has performed at prestigious venues across the globe—including Carnegie Hall, the Library of Congress, the Sydney Opera House, and the Concertgebouw in Amsterdam—and received the Cleveland Quartet Award and the Naumberg Chamber Music Award. Dedicated to both traditional and contemporary repertoire, the quartet performs the entire two-century range of string quartet literature and has commissioned many new works. The ensemble joined Yale School of Music as Artists-in-Residence in 2014.

Arts Academy students enjoy frequent opportunities to engage with the world’s finest artists and performers, who regularly visit campus to conduct master classes, collaborate with students, and stage concerts and exhibitions. As a part of the institution’s vision for its second century, Interlochen will enhance the student experience by expanding access to visiting artists across artistic disciplines.