Clarinetist Solomon Sigmon will be featured in the program the week of Sept. 6. 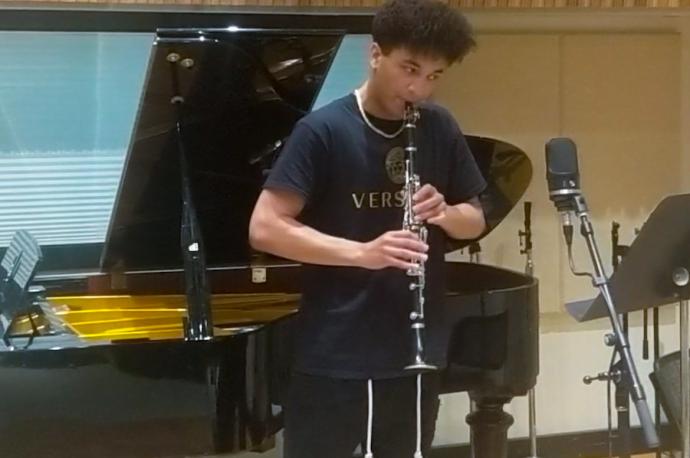 Clarinetist Solomon Sigmon, a recent Interlochen Arts Academy graduate from Owens Cross Roads, Alabama, will be featured on NPR’s classical music program, From the Top. The episode will air the week of Sept. 6 and will also be available to stream on demand on From the Top’s website.

The episode will feature young musicians from across the country and will highlight music by composers including Dmitri Shostakovich, Fritz Kreisler, and William Grant Still, as well as original compositions by young artists. Sigmon will be interviewed by host Peter Dugan and will perform “Hommage a Manuel de Falla” by Béla Kovács.

Sigmon’s high school achievements include performing at Carnegie Hall as part of the Middle School Honors Performance Series, winning second place in the 2019 Alabama Symphony Orchestra Concerto Competition, being selected for the 2019 All National Symphony Orchestra, and being selected for the 2020 Tanglewood Young Artist Orchestra. Recently, Solomon participated in the 2021 National Youth Orchestra of the United States of America (NYO-USA).

In addition to his appearance on the show, Sigmon received From the Top’s Jack Kent Cooke Young Artist Award, a $10,000 prize awarded to promising young artists to help offset the costs of studying classical music at a high level. Each year, From the Top chooses approximately 20 exceptional pre-collegiate musicians ages 8-18 to receive the award. Sigmon is the fifth Interlochen Arts Academy student to receive the award this year, joining clarinetist Najee Greenlee, cellist Maximus Gurath, oboist Elizabeth Perez-Hickman, and guitarist Daniela Santiago Martinez.