John is developing a film script as part of the Sundance Institute’s Native Lab, which convenes storytellers from indigenous backgrounds to hone their creative practice. 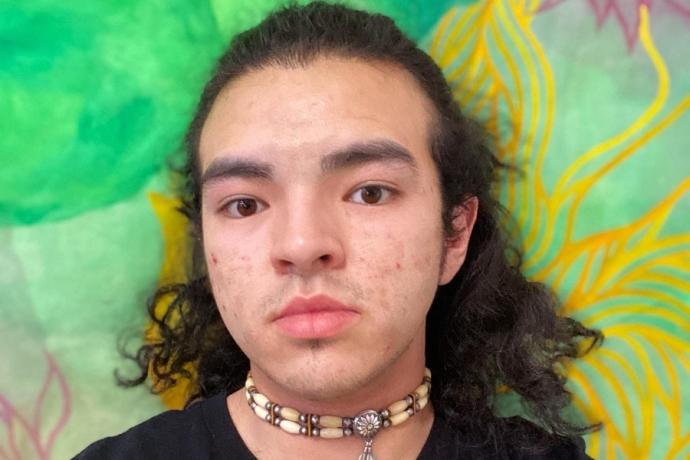 In May, the Sundance Institute named multidisciplinary artist Jamie John (IAA 15-19) a 2021 Full Circle Fellow and invited them to participate in its Native Lab, which convenes storytellers from indigenous backgrounds to hone their creative practice.

Soon after they graduated from Interlochen Arts Academy, where they majored in interdisciplinary arts (then called comparative arts) for four years, John was invited to Shenyang, China, for an arts residency. Due to the COVID-19 pandemic, they had to return to the United States after just two-and-a-half weeks, but continued their artistic work through a series of group exhibitions and the Sundance fellowship.

Founded by Robert Redford in 1981 to foster independence, risk-taking, and new voices in American film, the Sundance Institute supports independent film, media, and theatre artists from around the world and introduces audiences to their new work.

John is developing a script for a short science fiction film that draws on their cultural heritage as a member of the Grand Traverse Band of Ottawa and Chippewa Indians. “Being a native person, I’ve always been very close to the stories I tell, and it’s an important part of how I communicate as a person,” they said.

Here, John reflects on the intersection of art and culture, Sundance, and the formative experience of studying interdisciplinary arts at Interlochen.

How does your culture and heritage inform your art?

Because it wasn't written down, a lot of indigenous storytelling has been forgotten, or just isn’t taken seriously. I want to change that.

I’m indigenous to the area here in northern Michigan. I am Anishinaabe. Our historical migration took us from the Atlantic Ocean through present day Lenape land over in New York, through Mohawk territory and toward Michigan and lower Canada. My ancestors were here when the French arrived to trade, and long before Michigan became a state.

I would describe my work as centering indigeneity as humanity. I'm focusing on what being sovereign means in the 21st century for an indigenous person, whether that is through our relationships with our homelands, our people, our nation, our traditions, and our languages.

What inspired you to pursue the arts?

When I was about six or seven, my grandfather, who was also native, passed away. After that, I took a gardening class to help me through the grieving process and one of the teachers there was an art therapist. She really helped me discover my love for telling stories through the arts.

At its core, art really is about telling a story. Being a native person, I’ve always been very close to the stories I tell, and it’s an important part of how I communicate as a person. I'm a painter. I work in clay. I work in video. I work in print, and ink, all different types of media.

When I enrolled at Interlochen as a comparative arts major [now called interdisciplinary arts], it provided a wide range of arts experiences, but I tended towards visual art. I did a lot of painting and a lot of my ideas still tend to come from my sketchbook.

Being a comparative arts student was really helpful because I learned so much about working in different mediums, which boosted my confidence. The whole experience of just being around other artists, and seeing what they were working on felt remarkable and allowed me to see what the future of the art world could be.

Another big part of my Interlochen experience that inspires me is all my teachers who believe in my work—people like Clyde Sheets, Mary Ellen Newport, and Johnson Hunt. I wouldn't be where I am today without Interlochen.

How has your participation in the Sundance Institute’s Native Lab influenced your work?

Even though the program is happening in the digital space over Zoom calls, it still feels like there is a profound connection between the artists. We all know where we come from and want to honor that. We’ve gotten to know each other, and past fellows have also come to speak with us. It really seems like once you are part of the Sundance indigenous team, you’ll be connected for life.

I never expected to do this kind of creative work, but I’m actually working on a script for my first science fiction short film right now. A lot of times, science fiction tends to draw from colonial archetypes, and I’m trying to sort of spin that on its head.

My story draws from our Anishinaabemowin stories where we would go through fasting rituals or have ceremonies to travel to a star world. The script is about a kind of space camp for indigenous children who are looking to revive the ceremonies and traditions that were taken from them, so they can travel to the stars too. At the same time, they are on the run from agents of the Bureau of Indian Affairs. The working title is called “Ogichidaa to the Moon.” Ogichidaa in Anishinaabemowin translates to “warrior” in English.

Being able to hear feedback from other native filmmakers and seeing how all of our personal narratives and cultural histories shape how we express ourselves is so rewarding and profound.