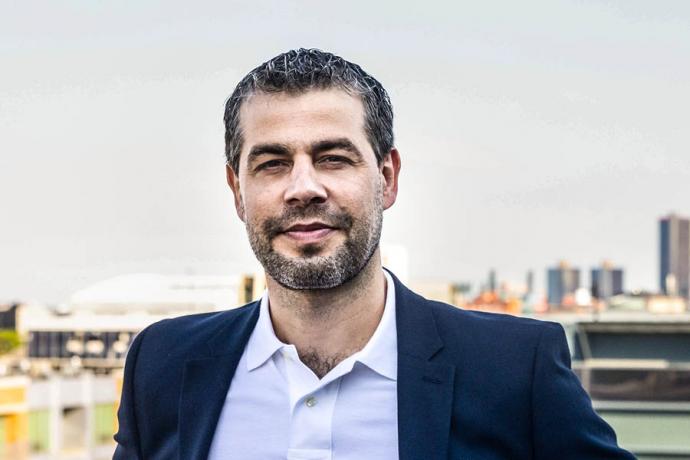 A long history of collaboration between Interlochen Center for the Arts and the Detroit Symphony Orchestra (DSO) adds yet another chapter this July. The DSO’s Music Director Jader Bignamini will be in residence at Interlochen Arts Camp from July 22 to 24. DSO musicians will lead master classes and Bignamini will conduct a performance by the DSO on Friday, July 22 and Interlochen’s World Youth Symphony Orchestra in a side-by-side performance with DSO musicians on Sunday, July 24.

This will be the DSO’s first in-person residency at Interlochen since 2019, following two years of virtual instruction during the pandemic. It will also be the first visit to Interlochen for Bignamini.

He brings with him a wealth of experience and talent. The native of Crema, Italy made his American conducting debut at the Santa Fe Opera in July 2015, followed by appearances at the Metropolitan Opera and the DSO. In January of 2020, the DSO announced that Bignamini had been selected as their 18th Music Director.

From Clarinet to Conducting
Bignamini’s musical journey began at a very young age. When he was nine years old, Bignamini spotted a picture of a man playing clarinet on the cover of one of his schoolbooks.

“I was impressed with the instrument but I didn't know exactly what it was,” Bignamini remembers.

He sought out the wind band in his town and asked them if he could learn to play the “flute” he saw in the picture. Before long, he was taking clarinet lessons.

In addition to his lessons, Bignamini benefited from the musical culture that surrounded him. Though neither of them played an instrument, his parents were both music lovers, so the family listened to a mixture of popular music and opera arias. One of his early teachers gave Bignamini operas and symphonies on tape.

“I learned all the Verdi symphonies and the Rossini symphonies when I was between 9 and 13,” Bignamini recounts.

He attended Piacenza Music Conservatory as a young man. Around the age of 16, Bignamini’s interests underwent a shift; he began to read scores attentively and think about conducting.

“I practiced for fun in my bedroom with a stick,” he says. “It was just a passion inside me.”

When the conductor of the local wind band retired, 19-year-old Bignamini was tapped to fill the position.

Bignamini pursued both his conducting and performing interests simultaneously, soon earning a clarinet role in a professional orchestra. When he was 27, he had the opportunity to conduct Beethoven’s Seventh and Eighth Symphonies. Something transformational occurred that day, and his career path became suddenly clear.

“It was very meaningful to me,” says Bignamini. “I decided that I wanted to be a conductor.”

A few years later he took the role of assistant conductor at the Orchestra Sinfonica La Verdi in Milan. From then on, Bignamini found more and more opportunities to conduct in Italy and abroad.

Connecting with Other Musicians
Bignamini enjoys connecting with other musicians, whether he’s instructing young people, listening to jazz, or conducting his own orchestra.

While at home in Italy, Bignamini assists his wife Lidia with the Juniun Band, an ensemble of approximately 50 musicians aged 8 to 20. He greatly enjoys making music with young people.

His time working in Michigan has had its own share of cultural opportunities; Bignamini takes delight in Detroit’s thriving jazz scene. When asked how his love of jazz impacts his classical conducting, Bignamini says he sees plenty of overlap.

“Conducting is improvisation,” he offers. “Tonight I might conduct in one way and tomorrow night in another way because my feeling, my mood is different than today.”

According to him, a conductor must make strong connections with his soloists, and be ready to adapt his style to their expressions of the piece.

Bignamini’s approach is unique in that he usually conducts without a score in front of him, looking his orchestra in the eyes.

“I prefer to conduct symphonic repertoire without a score. I do that because it's easier for me to have visual contact with all of the musicians,” he says. “If they understand that I know the piece without the score, they probably feel safer with me.”

Highlights of a Summer at Interlochen
This summer, Bignamini is eager to bring Tchaikovsky, Coleridge-Taylor, and Rachmaninoff to the stage.

On July 22, under his baton, the DSO will perform in a concert at Kresge Auditorium featuring Tchaikovsky’s Symphony No. 5 and Samuel Coleridge-Taylor’s Symphonic Variations on an African Air, Op. 63.

“Tchaikovsky is able to mix and balance very well the energy, the strength, the poetry, the love, and the passion [of Symphony No. 5]. I love the brass section in the finale—they have the majesty of the piece,” Bignamini says.

As for Symphonic Variations on an African Air, Op. 63, Bignamini has enjoyed conducting it several times already.

“A non-musician can listen very easily and appreciate it from the beginning until the end. It’s a very positive piece… at the end of this piece, you are at peace with yourself,” he notes.

On July 24, Bignamini will lead DSO musicians and WYSO for a side-by-side featuring Rachmaninoff’s Symphony No. 2 in E Minor, Op. 27.

According to Bignamini, Rachmaninoff masterfully balanced “strength and energy” with an “island full of peace” in Symphony No. 2 in E Minor, Op. 27. Having been a clarinet player, Bignamini especially appreciates the third movement’s “beautiful” clarinet solo.

A Life of Constant Improvement
During his time at Interlochen, Bignamini is looking forward to sharing fresh insights with WYSO’s young musicians. His advice is drawn from a lifetime of performing and listening to music.

“To be musicians, they need to practice their instruments and study music—all this is very important,” he says. “But you also have to live the music all day, and listen to music every day. We have an incredible number of compositions in the world. It’s impossible to know all the music, but it is important to try.”

Bignamini has dedicated himself to a life of constant improvement.

“I want to learn one more piece. Every day, one new piece.”

On Friday, July 22, at 7:30 PM, the Detroit Symphony Orchestra will perform Pyotr Ilyich Tchaikovsky’s Symphony No. 5 and Samuel Coleridge-Taylor’s Symphonic Variations on an African Air, Op. 63. Tickets may be purchased here.

On Sunday, July 24, at 7:30 PM, the World Youth Symphony Orchestra performs with members of the Detroit Symphony Orchestra. The combined ensemble will perform Sergei Rachmaninoff’s Symphony No. 2 in E Minor, Op. 27. Tickets may be purchased here.