Interlochen Center for the Arts to Unveil New Music Center

The three-day campaign finale will feature a festival of student performances. 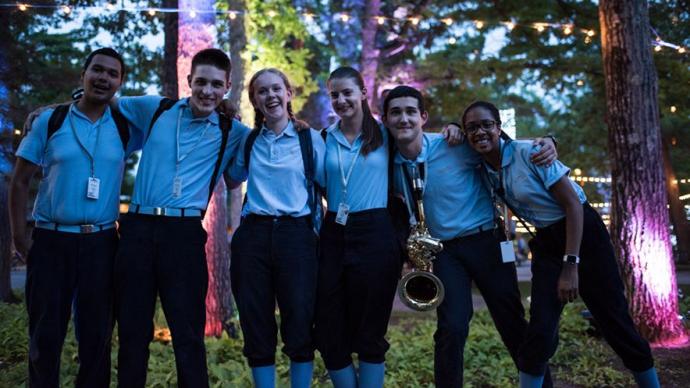 Camp students celebrate the launch of CREATE AMAZING at Collage 2016.

In less than seven years, more than 18,500 donors from 54 countries and 50 states have come together to transform the Interlochen Center for the Arts campus and create a positive, lasting impact by uniting people of all ages through the power of the arts. Together they “created amazing,” and on May 22-24 Interlochen will celebrate in truly “amazing” style.

“Our campus has been revitalized with new buildings, and the new Music Center symbolizes significant progress toward the completion of our 1990 campus master plan. It also marks an inflection point and a defining moment for Interlochen—a moment to celebrate the completion of this three-decade journey and shift our emphasis to our people and programs that will fill these new facilities with energy and artistry. Our goal as we now approach our 100th anniversary is to ensure that the very best students can find their way to Interlochen regardless of their financial circumstances,” said Interlochen Center for the Arts President Trey Devey. “It’s time now to celebrate our supporters and our promising future that they are making possible.”

Those celebrations will include a festival of current Arts Academy student performances, many of which will be available to stream via live webcast. A full list of scheduled webcasts will be posted on live.interlochen.org in the coming days.

“Interlochen was founded as an innovator, and that spirit carries forward today. The Music Center embodies our commitment to advancing art and providing exceptional resources for the next generation of artists to develop a strong foundation. It’s the only building of its kind dedicated to high school music designed to accommodate both orchestral rehearsals and studio music while providing space for experimental collaborations with all of our different art forms,” Devey said. “It will lead the way for us to create bold new programs that will shape the future of the arts.”

Camille Colatosti, Provost at Interlochen Center for the Arts, echoes those statements.

“We are all so grateful for the philanthropy that made the Music Center possible. The new Music Center provides the opportunity to incorporate 21st century expectations into our already rich music curriculum. With the built-in ability to record in rehearsal halls, music production and engineering capabilities in professional recording studios, convertible performance/classroom spaces, and much needed private teaching and ensemble studio space, music students will have even greater success and Interlochen as a whole will be able to expand offerings and enhance the curriculum.”

“I first attended Interlochen in 1974. Now, 45 years later, it is encouraging to see this level of support and how Interlochen still reaches far beyond the woods and lakes of northern Michigan,” said Campaign Cabinet Co-Chair and Trustee, Nancy Hoagland. “This Campaign has ensured that every artistic discipline will have a centralized and modern home on our campus as we move toward our 100th year. We are excited to take this moment to celebrate with the community that has made these advancements possible while still recognizing and preparing for the work ahead as we ensure a strong future for this very important institution.”

“We are thrilled to be able to share how Interlochen is moving forward,” said Campaign Cabinet Co-Chair, Nick Mischler. “This success has allowed us to switch our focus from revitalizing campus to becoming more financially accessible for deserving, young artists across Michigan and the world. This impact will be felt for generations to come.”

The Music Center, fully funded at $24 million, was part of the largest comprehensive fundraising campaign in Interlochen’s history. Overall, the Campaign raised nearly $135 million. $37 million was raised for campus improvements, including significant enhancements to the Dance Building and Corson Auditorium and the construction of Corson Waterfront Park and the Dennison Center for Recreation and Wellness.