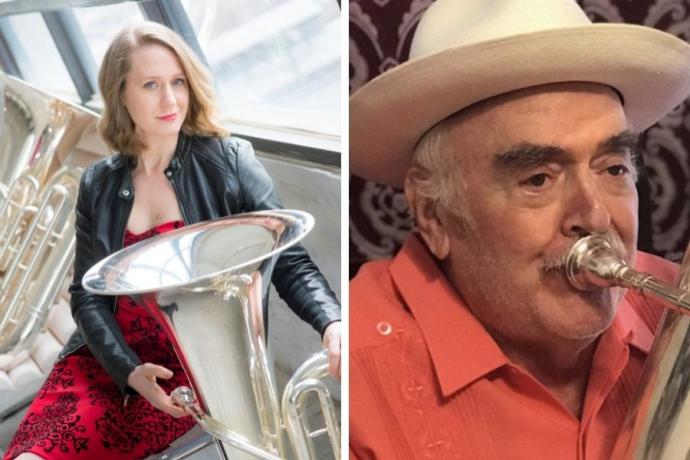 Acclaimed tubists Roger Bobo (IAC/NMC 54-56) and Carol Jantsch (IAA 99-02, IAC 94-96, 98-99) will visit Interlochen Arts Academy during the week of Nov. 1. During their residency, the acclaimed Interlochen alumni will conduct a series of master classes for Arts Academy low brass students. Jantsch will also present a pre-premiere performance of Wynton Marsalis’s Tuba Concerto with the Arts Academy Orchestra on Friday, Nov. 5 at 7:30 p.m. Tickets can be purchased at interlochen.org/tickets.

Jantsch joined the Philadelphia Orchestra as principal tuba in 2006, making her the first woman to hold the position with a major American orchestra. In addition to her duties with the orchestra, Jantsch is a leading interpreter of repertoire for the solo tuba and has appeared as a soloist with numerous ensembles including the Columbus Symphony, the St. Petersburg Symphony in Russia, and the United States Marine Band. Jantsch is also a member of and chief arranger for Tubular, an ensemble of tubas, euphoniums, drums, and vocals that performs covers of popular rock and pop songs at bars and events. Jantsch can be heard on numerous recordings and released her debut album, Cascades, in 2009.

An avid educator and arts education advocate, Jantsch has given master classes around the world and appeared at festivals in Finland, Germany, Canada, and the United States. In 2018, Jantsch founded Tubas for Good, a nonprofit organization that provides instruments and coaching for music students in the Philadelphia School District. A graduate of Interlochen Arts Academy and the University of Michigan, she is currently on the faculty at Yale School of Music and Temple University’s Boyer College of Music.

One of the first tuba artists to present a solo recital at Carnegie Hall, Roger Bobo’s first recording (Roger Bobo Plays Tuba for Crystal Records) influenced countless young tuba artists at a time when there were only a handful of solo tuba recordings available. As a performer, Bobo held positions with the Rochester Philharmonic Orchestra, the Royal Concertgebouw Orchestra, and the Los Angeles Philharmonic and has appeared as a soloist with ensembles around the globe.

Bobo currently devotes his time to conducting and teaching. He has held faculty positions with Musashino Academy of Music in Tokyo; the Fiesole School of Music near Florence, Italy; and the Royal Northern College of Music in Manchester, England. His former students include renowned trombone soloist Christian Lindberg; Chicago Symphony Orchestra principal tubist Gene Pokorny; and Carol Jantsch. Bobo is a graduate of the Eastman School of Music and attended Interlochen Arts Camp from 1954 to 1956.

Arts Academy students enjoy frequent opportunities to engage with the world’s finest artists and performers, who regularly visit campus to conduct master classes, collaborate with students, and present concerts and exhibitions. As a part of Vision 2028, the institution’s vision for its second century, Interlochen will enhance the student experience by expanding access to visiting artists across arts disciplines.