Margaret Batjer opens up about her background in violin and shares words of wisdom for students. 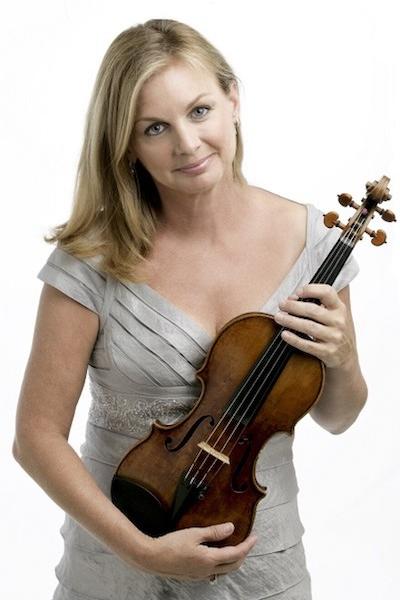 Batjer attended both Arts Camp and Arts Academy at Interlochen before going on to tour the United States and Europe as a performer at some of the world’s greatest concert halls and venues.

Since 1998, she has been concertmaster of the Los Angeles Chamber Orchestra, and is on faculty at the University of Southern California’s Thornton School of Music and Colburn Academy.

This year she will return to Interlochen as a Valade Concertmaster for the World Youth Symphony Orchestra, joining the Interlochen Arts Camp's premiere ensemble for in-rehearsal coaching. She will also lead sectionals, give private lessons, and more.

From “Twinkle, Twinkle, Little Star” to Interlochen Arts Academy
Born in the small town of San Angelo, Texas, Batjer comes from a family of musicians. Her mother was a violinist and a teacher, while her grandfather was an amateur violinist. When Batjer was just three years old, her grandfather gave her a violin that had been adapted so that she could reach the fingerboard.

“He taught me how to play ‘Twinkle, Twinkle, Little Star’ for my mom,” Batjer remembers.

From then on, there was no looking back. The young musician spent four summers at Interlochen Arts Camp, starting at the age of 12. The experience was instrumental in launching her career.

“That was the first time I'd ever been in a place where there were other people my age, doing what I was doing… I felt like a normal person. And that was life-changing,” Batjer says.

It was around this time that Batjer became “very serious” about her work with the violin. When she heard about Interlochen Arts Academy, Batjer begged her mother to send her, and found that she was open to the idea.

“She knew what it took to become a musician, and she felt that this was probably the best opportunity for me to pursue my dreams as a musician,” Batjer recalls.

Batjer spent two years at Interlochen Arts Academy and still maintains friendships with several of her classmates. After that, she followed master teacher Ivan Galamian to Curtis Institute of Music, where she would remain for the next seven years.

Performing Around The World
In her late teens, Batjer’s performance career began to blossom. She remained mindful, however, of the possibilities of teaching. During her final years at Curtis, Batjer assisted Galamien in the classroom with younger violin students.

“I think the seed was planted then because I would go in and watch him teach and I learned so much,” she says. “In a way, I learned more than in my own lessons about how to teach.”

Batjer traveled the world, performing solo, in chamber ensembles, and in orchestras. She began recording her music and playing at many different festivals, from the La Jolla Summerfest to the Salzburg Festival.

In the midst of her work, she received her first teaching position at University of California Santa Barbara. Soon, Batjer was asked to join the faculty at USC’s Thornton School of Music. While working there and at the Colburn Academy, she helped her students advance towards distinguished careers of their own.

Advice For Young Musicians
Along the way, Batjer has been guided by a teaching philosophy that demands excellence, urging all her students to develop a broad base of musicianship.

“Students need a support system that nurtures not only their violin playing—their technical ability to play the violin—but their musical identities. They have to be able to go beyond playing the violin,” she says.

Batjer recognizes that time is perhaps the greatest challenge for young musicians.

“The most important thing is to not waste your time. There is a limited amount of hours that these students have, because the academic demands are very intense in many schools. I want them to have well-balanced lives.”

She urges students to find a “very, very fine teacher” who doesn’t skip over the “building blocks” of string technique.

Future Plans
What’s next for Batjer? She looks forward to touring this fall with her ensemble, the Los Angeles Piano Trio. She’s also excited to continue working with the Los Angeles Chamber Orchestra, where she is Director of Chamber Music, and hopefully restore some normalcy to the post-pandemic concert scene.

The violin remains a deeply-rooted part of her identity.

“I think that when you do something that you love from the time you’re a little baby, you don't ever question it,” she says. “That becomes who you are and not what you do.”